3 really good reasons why a 10 percent THC limit on Florida medical marijuana is a horrible idea:

Even if you set aside all the evidence against opioid use and in favor of medical marijuana use — even if you just ignore all that completely — here are three really good reasons why limiting Florida medical marijuana to 10 percent THC levels is a grotesquely rotten idea.

If this bill becomes law, patients that can afford to buy twice as much sub-par medical marijuana will just use more of the products they consume in order to get the desired results. Or…

Many patients with qualifying medical conditions find it hard to afford medical marijuana as it is — insurance doesn’t cover it.  And illicit marijuana is already cheaper than legal marijuana in Florida. Moreover, commonly used products such as cannabis concentrate syringes (which are easy to use and provide accurate dosing) will be outlawed. If THC levels are limited to 10 percent, we’re going to hear a giant sucking sound as millions of dollars gets sucked out of the Florida economy and put back into the black market. It will end up being an extremely costly move in the long run. Spend that money on drug abuse education may be a better option.

In addition to limiting THC to 10 percent, the bill would also allow the Florida Department of Health to test crops to ensure they comply. If a crop tests at 11 percent THC, the law will require the entire crop to be destroyed. Does anyone doubt that multi-state operators such as Trulieve and Curaleaf will think twice about investing in Florida when they can spend those resources other states? 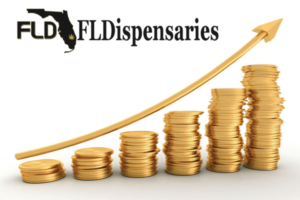 Will a 10 percent limit on THC pass in Florida?

Ever since medical marijuana was approved by voters in 2016, opponents in the legislature have been trying to excoriate the law. First deciding that they know better than the experts and banned the sale and use of smokable flower. That rule was struck down by a state court. Now, this.

But will it pass?

According to the Times, “Roach’s bill cleared the committee with every Republican voting in favor of it, and every Democrat voting against it.” The bill will have to pass through at least two more committees before it heads to the House floor. Both of those committees are Republican-controlled. So it might pass the house.

Republicans made a similar proposal calling for a 10 percent THC cap for products sold to patients younger than 21 that passed the House in 2020. It died on the Senate floor. The Senate version of Roach’s bill, SB 1958, has yet to be heard by a committee.

Will it pass? Unknown.

If you wish to express your opinion, you can find your local lawmaker and their contact information here: https://www.myfloridahouse.gov/FindYourRepresentative