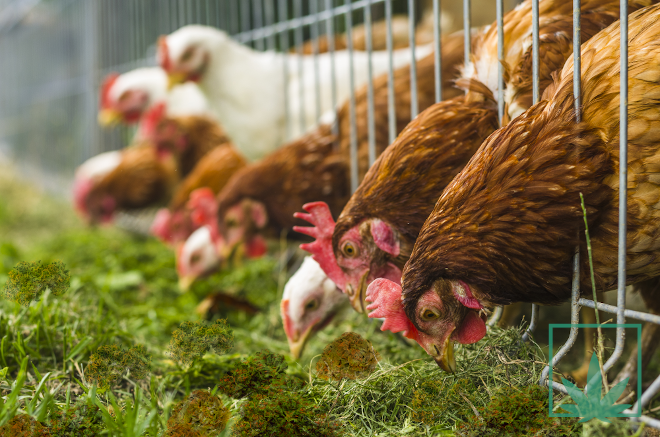 Recently, Thailand legalized the possession of cannabis by adults. However, humans aren’t the only species in the country enjoying their newfound herbal freedoms! It seems a medical marijuana farm in the Lampang region in Northern Thailand has adopted the practice of foregoing the use of antibiotics and feeding its free-range chickens hemp instead.

The special chicken feed is produced by adding crushed cannabis to food and water. Although Thailand has legalized marijuana it still has strict guidelines around THC content. Products for human consumption are only permitted to contain 0.2% THC. However, the cannabis chicken feed often contains twice that amount.

Does feeding marijuana to chickens actually do anything?

Researchers from the Department of Animal and Aquatic Sciences at Chiang Mai University (CMU) are taking the lead in this controversial study. Thus far, the experiment appears to be highly successful. Apparently, the pot-fed chickens are flourishing. In fact, less than 10% of the chicken being used in the research have expired since the introduction of cannabis into their diet.

Assistant professor Chompunut Lumsakgkul, the study leader is a strong supporter of cannabis chicken feed. “The cannabis feed appears to be working,” said Professor Lumsangkul  “The mortality rate for the chickens at the farm has been the same as in regular seasons when there isn’t a severe outbreak of any bird-killing disease.”

Traditionally, chicken farmers use antibiotics to prevent and treat infections in addition to stimulating growth. The chickens on this cannabis-infused diet are not given any medicine or antibiotics.

At this point, researchers have not fully ascertained if the cannabis feed actually protects the chickens against aggressive strains such as bird flu and the findings of the study are still under review and have only collected one year’s worth of data.

The upside for the farm is that since the poultry is antibiotic-free, the chickens and their eggs are sold in markets at double the price to those seeking an organic option. By all accounts, the cannabis-fed chicken is both better tasting and more tender than standard chickens sold on the market.

“Consumers in Thailand have been paying attention to this because demand is increasing for chickens and many farmers have to use antibiotics. So some customers want to find a safer product,” Lumsangkul said.

Because the weed-fed chickens fetch a higher price, even if the hemp feed is just half as effective as antibiotics, the flock could still bring in the same revenue.

Do the chickens get high from eating cannabis?

There was some debate as to whether or not the cannabis feed would make the chickens high. The research team addressed this concern by upping the THC content in the chicken feed. In fact, the levels administered were well beyond the legal limits for the human populace in Thailand. The chickens, however,  did not appear to show any ill effects from the higher THC content.

“I can’t say the cannabis doesn’t let the chickens get high, but they exhibit normal behavior,” Professor Lumsangkul said.

How does feeding cannabis to chickens affect people who eat it?

Additionally, there were concerns regarding the effects of eating cannabis-fed poultry. The professor claims there is “no way” people can become intoxicated from consuming this meat. Prior to slaughter, the cannabinoid (THC) is completely metabolized by the chicken’s body and rendered ineffective by the time it reaches the table.

The research has yet to determine exactly why cannabis feed is so beneficial to farm-raised chickens. Professor Lumsangkul speculates, “it’s likely due to the bioactive compounds found in marijuana.” These compounds may boost the immune system and produce beneficial metabolic activity in the chickens.

This experiment seems to further attest to the many benefits of cannabis consumption. As marijuana laws around the globe are relaxed, humans (and now farm animals) can reap multiple health benefits from this miracle plant.